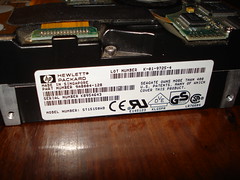 This week I have been asked to fix a computer by someone that I know, he has the computer a little over a year now and it has suddenly stopped working for him. Once the computer starts up you see the manufacturers splash screen, then nothing! It just stays there.

This was now the perfect time to use my external hard drive cables that I bought a while back, I connected the cables up and into my computer and turned the power on and the drive begun to spin, but no usb drive was detected. I thought that was a bit strange because every drive I connected before always got picked up by the computer.

It turn out this hard drive (Seagate Barracuda) would work perfectly one day and you would shut the pc down normally and the next day it would just not work. So basically the hard drive is bricked. The problem apparently was to do with the firmware on the hard drive itself, there is now a fix released for the hard drive which will prevent this from happening, however if your hard drive has already been bricked then there is no way to flash the new firmware onto it.

There is a way to fix these hard drives, someone found this hack that would work involving getting a Nokia Mobile cable and connecting it to the hard drives pins and using HyperTerminal or putty to send commands to it, I think it looks a bit complex so decided not to give it a go.

After a while of looking for a new hard drive online I quickly realised how expensive some people are selling them for. I decided I would go for a Western Digital hard drive as they are the most reliable.

Most hard drives I looked up cost around €70.00 , The current hard drive in the computer had a capacity of 500gb so I asked him if he wanted more space, and since he does a lot of multimedia work he said he could do with a bit more, so we went to the next available size which was 640gb.

The cheapest place I found this hard drive was on Komplett where it was just €54.78, not bad so before I ordered it I said I will have a look in Pc world here in town and the price was just mental, they were selling a 500gb hard drive for around €140.00! Not a chance I was going to buy it from them, so I ordered it from komplett.

The funny thing is that the UK PC world are selling the same hard drive as the Irish PC world for only €70.00! It is ridiculas the way they can have such a huge difference in their prices, so much for a chain store, I thought they all kept their prices the same!