Looks like I am going to see KT Tunstall next Monday!

I was on Ticketmaster over the weekend just seeing if there was any concerts coming up that I might like, turns out there are a few so I think I will be going to some more this year.

I bought 4 tickets tonight and it took forever, usually I have no problems ordering tickets but there seemed to be some strange glitch when ordering these tickets. I first tried to order all four together and no joy, I kept getting a message telling me there was no tickets for my search! 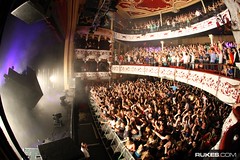 I kept trying and eventually realised I could order them as two separate orders, it wouldn’t let me order two sets of 2 so instead it would let me order a set of 3 and another single ticket, really strange and in case you are thinking maybe there is a limit, well there is and it is 8!

Before I ordered the set of 3 and 1 tickets a checked about them to make sure they are the exact same area, which they are, so since the area is first come first served in relation to where we sit, we will have to get in early for the best seats.

Unfortunately the tickets are seated, that’s all I could get, I could get a single standing ticket but that is of no use.

The gig in on next Monday – February 21st in the Olympia Theatre, and there are still some tickets left if you like them too, just go on over to Ticketmaster.

Here are a few of her songs below.