Monaco, what a race!

Last week I said I couldn’t wait until this Monaco race, I said it is my favourite track and it definitely didn’t let me down this time!

The safety car drivers certainly had their work cut out for them today, they were out four times in the course of today’s race, that is just mental! Loads of disadvantages there with the cars becoming overheated which can cause havok.

I like the Monaco track because it is really challenging for the drivers, overtaking is virtually impossible, but Alonso made short work of that and made it from all the way at the back of the grid in 24th position to finish the race in 6th position! That made the race even more entertaining.

Unfortunately Button didn’t make it to the finish line, having to retire on just the second lap! because his car begun to overheat due to a cooling cover being left on the left sidepod of his car.

There were lot of racers that had to retire from the race including Kovalainen, Senna, Barrichello, Kobayashi, Lucas di Grassi, Glock, Pedro de la Rosa, Button and Hulkenberg. That is a heck of a lot for one race.

On top of these there was also petrov who had to retire and a last minute crash between Karun handhok and Jarno Trulli, this crash looked  extremely bad with the two cars pilling up on top of each other almost making the racetrack fully blocked. 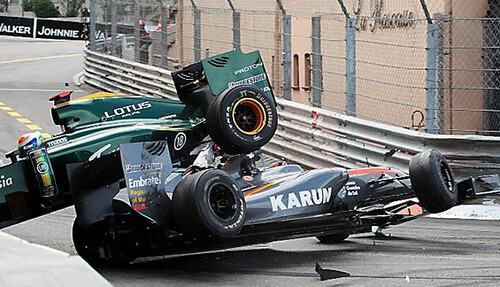 The race ended with Webber in p1, Vettel in p2 and Kubica in P3. My team, McLaren, Hamilton finished up in p5 with Button retired after lap 2.

All round an excellent race, with lots of action :D! A lot more than expected for such a tough track.

Schumacher got a last minute penalty for passing Alonso on the final lap which put him from p6 to p12, unfortunate result for him!

The next race is in two weeks time in Turkey, looking forward to it!