Last Thursday (October 30th) a website which I have been working on, for what would seem like a long time was finally launched live! I had actually completed the entire site except for one page, ‘Our Team’, by the beginning of the summer, but I couldn’t put it live because I was waiting for photographs of the staff. Finally last Monday I got all the photographs and I was able to complete the site and put it live. 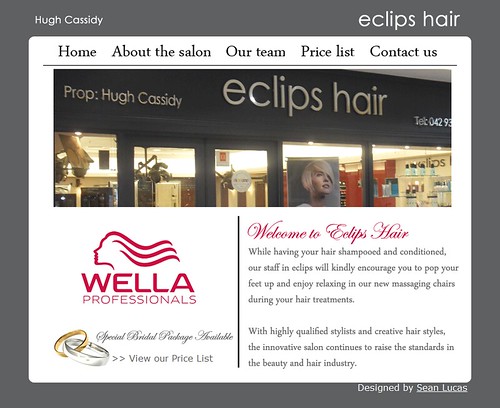 So the site I was working on was for a local hair salon, eclips hair, and I created the entire site from scratch. This website was my first ever wordpress platform based design for a client. I designed the site in Photoshop, then I coded and styled it using Dreamweaver in basic html and css. Once I had the template coded I then began to port it over to wordpress, this was actually not too difficult, it was a lot simpler than I thought it would have been.

There was a few things that broke when I brought it over to the wordpress platform, such as a few styles, but I managed to get it sorted, thanks to a Firefox plugin called firebug. 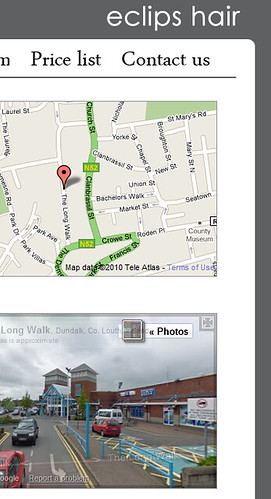 The website has a lot in it, it has Php, JavaScript and jQuery (fancy JavaScript). It gave me a chance to experiment with things I wouldn’t of used before. I also took full advantage of Google street view, the day I launched the site happened to be the day that street view was launched here in Ireland so I just decided to throw it in and be ahead of the game!

I also set up custom email addresses (hosted by Google for domains) for the website, by custom I mean it would be in the format of [email protected], so for eclips hair I could make one that looked much more professional than there old yahoo account address!

So from design to coding I done it all, now all that remains is SEO, that takes time, and another reason I chose the wordpress platform was because it has such good SEO power. Already the site is at the top of Google, one site is above it, however it is linking to the eclips hair website so that’s ok, for now! 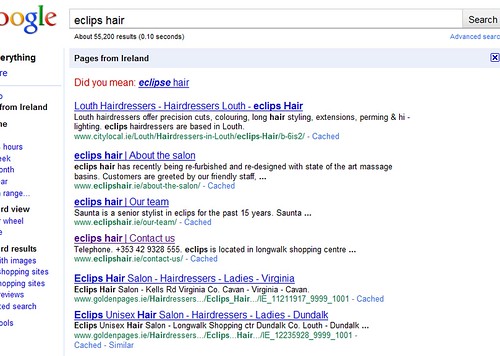 I reckon with a bit more time, it will be above all the other competition. I still have to get the keywords for the likes of ‘hair salon’ and ‘hair stylist’ into the site to try and get it into those search results.

The site also has a CMS (content management system) which makes it really easy to just log in and make a quick change if need be such as changing pictures or adding in special offers.

I definitely recommend using wordpress for building a site because you also have the huge plugin directory available to you from wordpress.com.

So reflecting on this website, I am really happy with how it came out. I think next time I update the site, I will be able to do so much more as this has been a learning curve for me since it was wordpress based.

So if you want to have a look at the site, then the address is www.eclipshair.ie.