by Sean
in Comedy, Movies 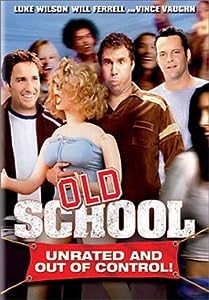 Keeping this ‘movie challenge’ up this week with week 2. Over the last week my friends came down to the house, we ended up watching a film that is not new to me, but a film that is good for a few laughs. Whenever friends come over it is best to keep the films light-hearted for the most part, nothing too serious because if you are having a laugh and throw on a serious film the chance are the mood of the room will change.

I had intended on watching a different film this week, but in the end just stuck with this one. I think i will watch the original film i wanted to watch, this week, and talk about it next week!

Old School is about a group of men who are trying to regain their youth by turning one of their friend’s homes into a ‘frat’ (party) house although none of them attend university anymore. Old School is a good film to watch if you don’t want anything too serious, something that will give you a good laugh but it’s not something that is extremely stupid like a lot of films i have seen over the years!

Without spoiling the film the nearby university gets wind of the new frat house that has been set up by the group of lads, and try their very best to get it shut down, even by making them take part in a list academic events to prove they are worthy and are beneficial to the college lifestyle whilst providing a benefit to the members of the frat house.

Old School features a very strong cast of popular comedic actors including Vince Vaughan, Luke Wilson and Will Ferrell. Also Ellen Prompeo makes an appearance in the film as an old love that Luke Wilson once had from years ago, if you are a fan of Grey’s Anatomy then you would recognise her as being the lead female actor who plays Meredith Grey.

Old School picked up a rating of 5.6/10 on Rotten Tomatoes which is not too bad! The film runs for about an hour and a half and if you have not had the chance to watch the film before now i would recommend you take a look at it, it’s nothing too amazing but is definitely good for a few laughs. Here is the trailer below for it if you are interested in it!