One Year Of WordPress

It is exactly a year today since i first started to use WordPress. Thats not to say this site has not been here more than a year. Before i started to use WordPress i was just using a plain old html site, it was not even a blog,  since this URL ‘leateds.com’ was my first ever domain i was new to the whole scene of creating websites.

I used to make some old very shabby looking sites in basic html,that i would then host on a free hosting account that would be riddled with bloody advertisements. These sites would i suppose provide some use, first off they gave me the ability to begin to learn how to code a basic site, then the other service that it provided was for when i was in school, since the schools would block links to certain websites i used to have available on my site a proxy version of certain sites available through an iframe. My whole class started to use it to get into bebo and then a few other years began to find out about the site and that they could get into bebo that way.

So in order for the teachers in the school to not be able to get onto my site i added a password to it so that they could not block the links that i was using on my site 😀 and then i gave the password out to the class, even if they had blocked my main url i would just create a new one and use the same content. Luckily enough they were not smart enough to think of blocking the main url :P, but they did see my site popping up in the history a lot and would try to find out who’s it was, they never found out though! 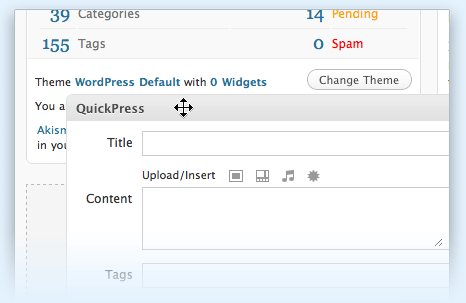 Anyway, the reason i started to use wordpress was because i like how easy it is to manage all the content on the website and instead of creating pages manually i would just have to click a button and it would just create one for me :D, simple and fast. Also i was terrible at designing sites so with the vast amount of themes available to the wordpress community it was basically a no brainer to switch.

I had however never heard of WordPress until i came to college, one of my fellow college classmates showed it too me. So then i decided i would just give it a go and see if i liked it or not, and now here i am a year later still using it 😀

Also i never intended on using it as a blog, if you look at the first month of posts in the archives page you will see that the posts basically relate in no way to blogging, they were basically just me adding things i liked such as some videos.

I also never really knew what blogging was :O, i didnt really read too many either. But now i read many blogs and subscribe to loads of different rss feeds, from news to entertainment and personal blogs. Reading through other peoples blogs gave me an insight into what the main kind of trend of blogging was. So eventually i decided to give it a shot, at the beiginning i was not too successful, i struggled to gain any traffic and my site was bearly indexed in google, my posts soon began to get less and less each month.

I finally decided towards the start of this year to give it a proper go, it was now or never, so since the start of this year i have started a constant posting of posts on a regular basis, and since i have started to blog on a regular basis now people seem to return to the blog and also the stats show that the visitor count is on the rise every month!:D

By beginning to use WordPress i have broadened my knowledge of coding websites. I never had any understanding of php code at all and now by using wordpress in order to be able to modify the site i had to learn at least the basics of php code.

Nobody had ever taught me how to code sites. Back when i first started out i was using Microsoft’s Frontpage Express. Then i moved onto the likes of dreamweaver and text based editors such as textpad. When i came to college then i had a few classes which taught the basics of html which i was fairly confident about and then i was also taught css code which was all new to me.

And now since the use of WordPress i know more advanced coding techniques such as php. The next step is a new way to create a website, i know that next year in college an assignment that we will be set is to make a website using Visual Basic!

Anyway, one year so far with WordPress and i expect to have many more in the future. I have no intention of changing the platform that i am using for blogging 🙂