Ever since I got my playstation 3 last Christmas  and found out that I can hook it up to a surround sound system through optical cables and have full 5.1 surround sound I have wanted to upgrade my system in my bedroom. As it stands at the moment I have a HDTV, playstation 3 and xbox 360. I am in the process of upgrading the xbox and last week I bought a hdmi switch.

The reason I bought a hdmi switch is because my TV only supports 1 hdmi connection, I got it when hdmi was just becoming popular, nowadays there are multiple hdmi ports on TV’s. So I bought the hdmi switch which came with a remote control which allows me to switch between devices. 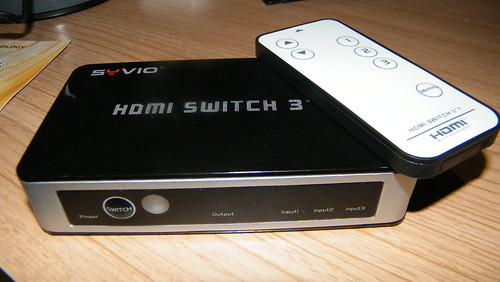 I want to also invest in a home theatre system for my bedroom, nothing too fancy, just a basic DVD 5.1 surround sound system which supports optical input. The cheapest I have found is this sony system on Amazon. It is cheap since it supports optical, you can get other 5.1 surround sound system for cheaper but they don’t support the optical which I want. I plan to get this sometime after Christmas, and there may even be a sale on it then!

So in preparation for this optical setup I have bought a few items tonight from Amazon, I bought 3 HDMI cables which were going really cheap, 3 optical cables and also a 3 into 1 optical switcher, the reason I got the switcher was because the surround system I am looking at only has 1 port for optical cables and since I will only be using 1 system at a time, it is more than enough.

Once all these arrive, which should be late this week or early next week, I will have a full HD setup in my room, I just won’t be able to use the optical cables until I get the surround sound system, I just got the cables now since they too were going cheap!

So with all this, my room is surely to be a bit over the top with electrics. I no longer use Sky in my room so I cancelled my subscription, and instead I will be linking into the sky which goes to the rest of the house.